Taken orally (held in mouth will provide sublingual absorption) or through a nasal / mouth spray, Molecula Silver in this ionic form is like having a second immune system, especially during immune-tested environments, be it from social or school activities, or from the weather.

Silver is also known in many health circles as a natural antibiotic and natural anti-inflammatory.

When purchasing this product you may want to look a refillable  Nasal Pump Sprayer.

1. Colloidal Silver - Silver that is electronically processed into a fine state of subdivision that is suspended in liquid and due to the electronic charge, holds it's individual character and settles very slowly. Only 6% or 7% of the body's membranes are penetrated.

2. Ionic Silver - Electronically processed silver that is broken down into a free electron (or sub-atomic particle) that exists in solution. Only 6% or 7% of the body's membranes are penetrated.

3. World Health Molecula Silver - A form of ionic Silver that has been electronically pushed into a state where it develops a self perpetuating pulse rate that is eternal in nature and pulses too rapidly for individual recording. One definition given by a noted physicist, Robert C. Beck, is that this silver when processed by this method, looses its identity as a traceable element i.e. is not identified as a particle, and acts more like a gas. Other research professionals have tested this silver and found the exact same thing. It is etheric in nature but carries the signature of the element silver.

The largest particle size of silver to be found is .062 nano's which is over 60 times smaller than angstrom in size. Only 1.7 to 5 ppm can be found in the product and yet it has the power of 2,000 ppm. 100% of the body?s membranes are penetrated. (Molecula Silver) has been extensively tested on literally tens of thousands of people with impressive success.

Colloidal and Ionic silver are in a 3 dimensional physical form and take up space. Even if so small they did not harmfully build up in the body, there is a second problem. One of the worlds leading physicists, considered to be the father of electro-medicine today, Robert C. Beck, tested these three forms of silver for penetrability. He found that all forms of colloidal and Ionic silver had a 5% to 6% effectiveness for penetrating certain membranes.

When he tested (Molecula Silver) Jim at World Health was astonished to see over 99% penetration!

Another major distinction between (Molecula Silver) and all others is that due to its energetic and etheric nature, it doesn't break down. Direct sunlight does not change its composition even after years of exposure. Molecula Silver is totally pristine & completely clear even when a laser is shot through the liquid. An exceptional Silver Product! 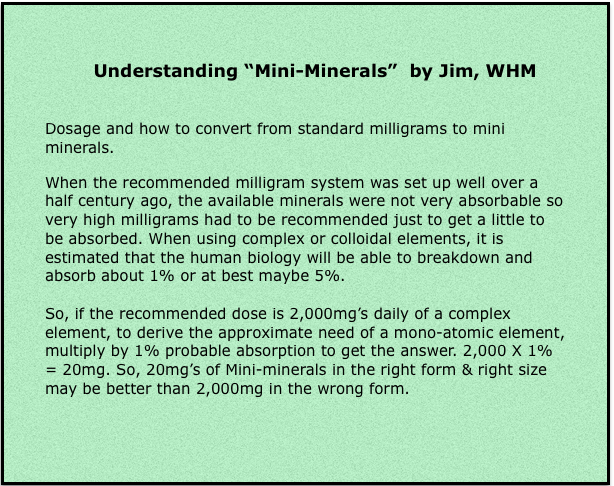